here the results, naja, not yet, mais the -work in progress- fyi in what im doing if bored: im happy to tell i have extracted 2,5l healthiest i hope juice of the fruits i collected yesterday +some glasses of jam of the rest of the maise which would be the squeezed berries. the super multitopf is still running under -high pressure- and getting the shit out of the mahonia which is i think the fruit-of-the-future. dont ask…

im glad you managed to the site and are bit of active, nestcepas. gives me reason enough to keep up with this. the site is (to me at least accessing from germany) not visible in the wordpress community which is good that way. feel free to share to people you trust or as i call -realavatares- cvd. people in the -realworld-. id loved to know the other folks from ada as well in here, but i didnt really communicate the idea. weeks is passing lentement and the academy becoming past.

ive finally made some contacts with the -responsibles- from kassel, that could help me with the project, the archive…, with which i actually applied for the academy. i wish i had more time to make some real progress in working on it. dresden had given me some rich energy and many ideas of what to do with the stuff which consists mainly of paperworks. but…, as soon as sommer had come, it slowly vanishes and new years not far… in autmun theres several literature projects at which i intend to be present as -rotefadenbuecher- in a more serious way than in the past. all is developing…; and by the way: if you can think of the idea to have for example some texts like the ones youd done in here published in the edition, tell me…, its simple way of producing some kind of chapbooks (schattendruck) which i carry with me when im -on the road- and get alway bit of revenue out of them…((you would get your deal…)), swap books of other authors, sell them…, invitations to drinks…, things like that. i have to establish a wider range of authors til autumn and its not easy to find people who dare to do this that amateur/independent way.

okay, this for that…, i have to take care of the -juicing-. alles gute, st. 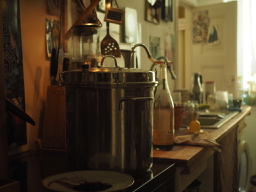 and: youre welcome to answer in here…, someday another post has to be opened if too much mb but til then here would be fine, nestcepas? nestcepas.

got here? fine…; two more days of travail, two weeks in sverige is next. i say there will be fish…

since youre the hours ahead, youve maybe started with shabbes maintenant, im still to finish one day-of-the-week. i hope you have a-lot-of-things-to-do what 1 calls: scheisze-viel-zu-tun-haben…, a term that became a one-word once when to have scheisze-viel-zu-tun was an exeception and didnt really described how we lived between club and school. i thought about your -deadline- sujet again and came to realise, that its not just the thing with having -one- deadline, but the tiny little steps -to- that date, that really matter. one has to observe the multitude of sub-deadlines to be able to meeting the obermotz at the end of the level. i still hope youre occupied in a way that makes sense to you.

did you check out the network is running from the academy? if you join there, you will be pioneer yet, its not very -vivid-. ive the impression most of the people have really scheisze-viel-zu-tun and doubt them realizing the potential of there to working together…